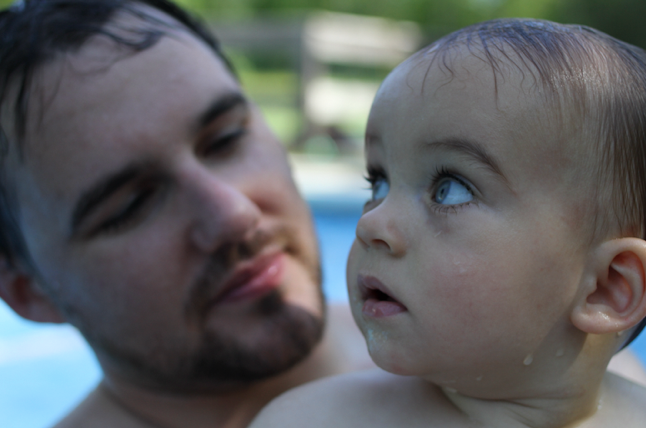 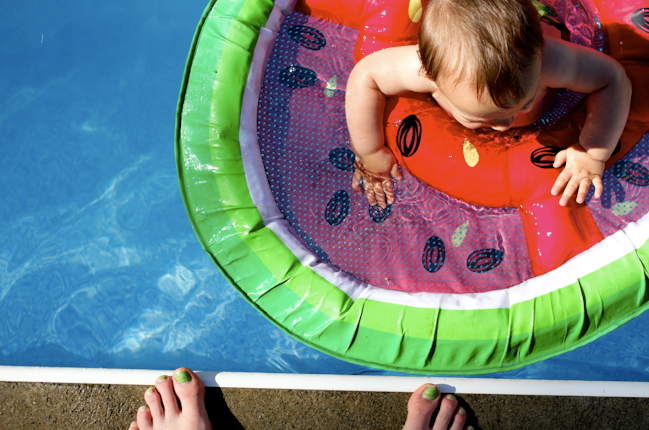 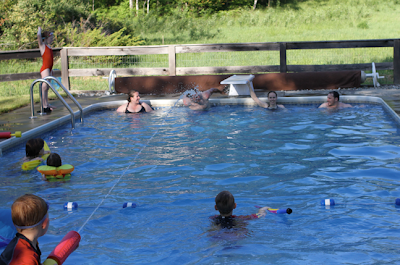 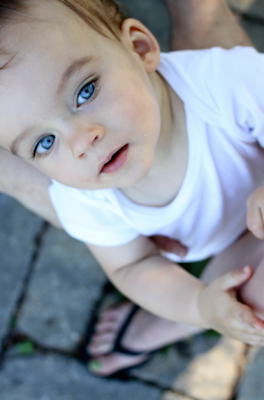 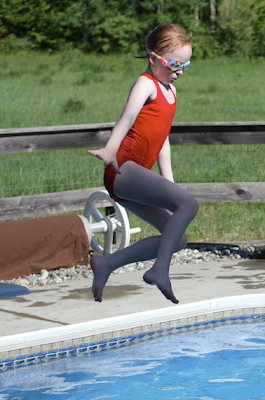 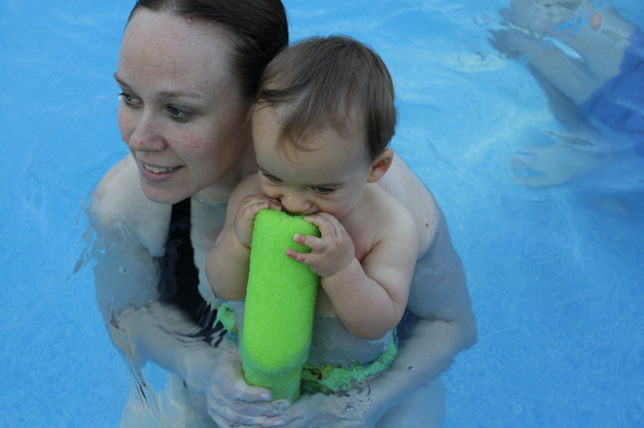 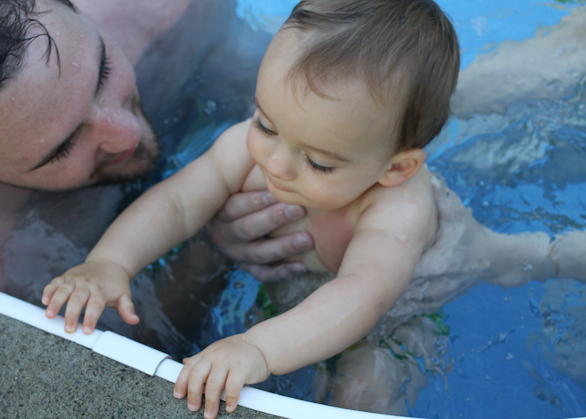 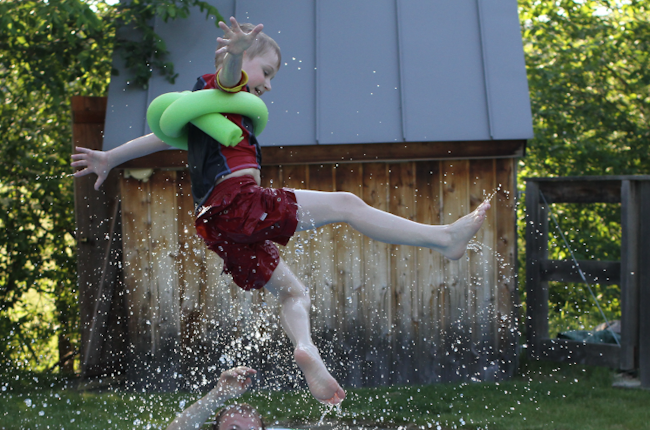 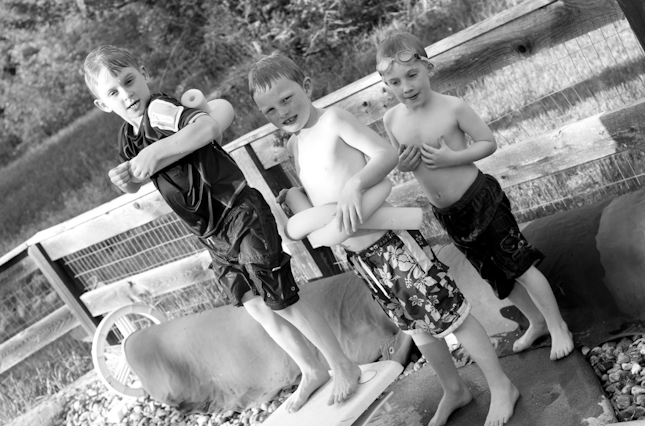 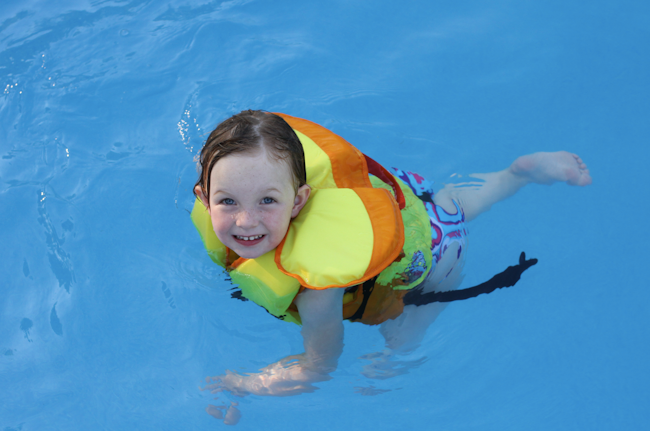 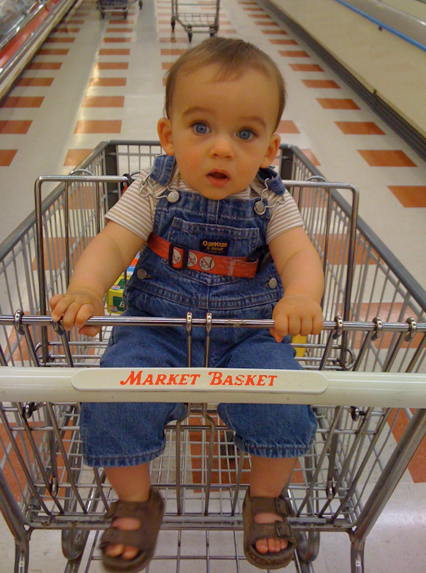 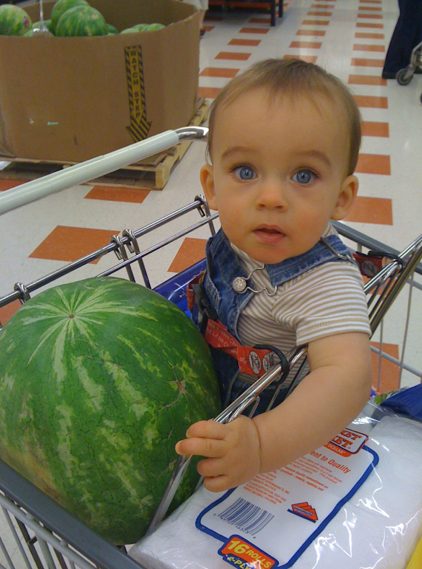 I think the Grocery Store should put this picture on all of their advertisements.
I mean who wouldn't shop at a place with that little face?
Also, I am very happy summer is here and we get to eat watermelons and strawberries.
Posted by Chris 3 comments: 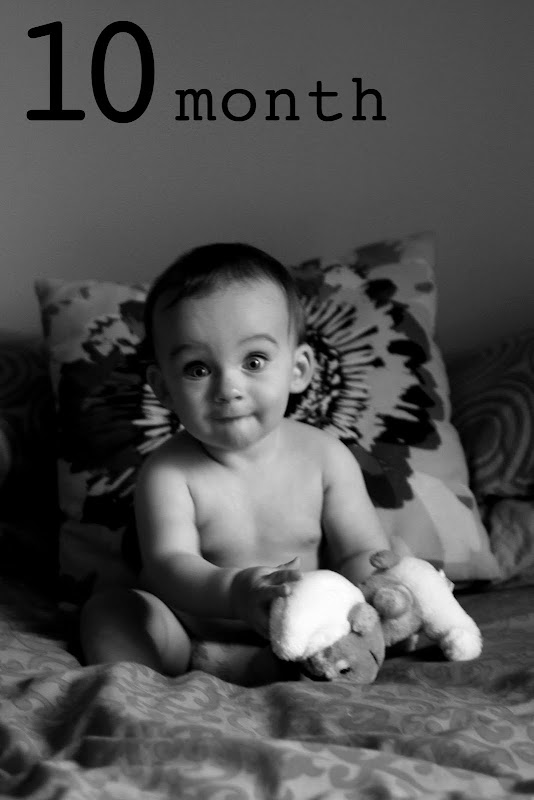 I am going to take this opportunity while he's napping to write a few things before they get lost in my brain. I mentioned his first tooth well now he has 2 teeth. He is drool monster these days. He's probably nearly 20 pounds and he seems to have extra chub everywhere he can. He's started to pull himself up on things and actually discovered the stairs the other day and I watched him try and pull himself up unsuccessfully but It's so interesting to watch him discover stuff.

He has been making the funniest faces recently and sucking in his bottom lip like he is in the 10 month picture. He is clapping his hands and will wave and said what seemed to be "bye" when someone waved and said "bye" to him. He is still sleeping well at night and taking a couple naps during the day. He is getting busier by the day and has his favorite spots around the house where he always goes to pull everything out or down. He leaves a little trail of destruction. He likes playing in the bath for much longer now. I remember mom saying she read lots of books during sitting next to the bath and I have started to enjoy reading while he splashes around.

He lights right up when someone even looks at him and gets down right giddy when anyone talks or plays with him. He likes playing with his cousin who is a year older than him and I can already tell they are going to be buds. He is very busy and doesn't often cuddle because he is always on the move by yesterday he fell asleep on me during church and it was perfect. 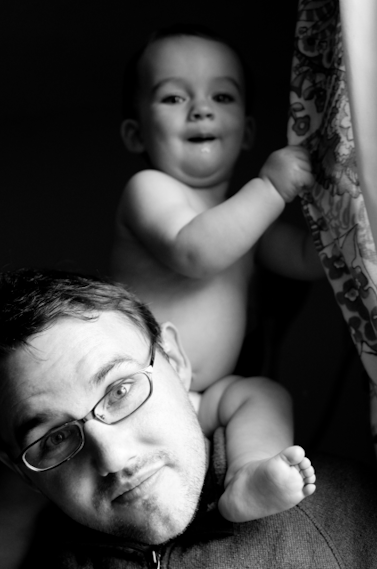 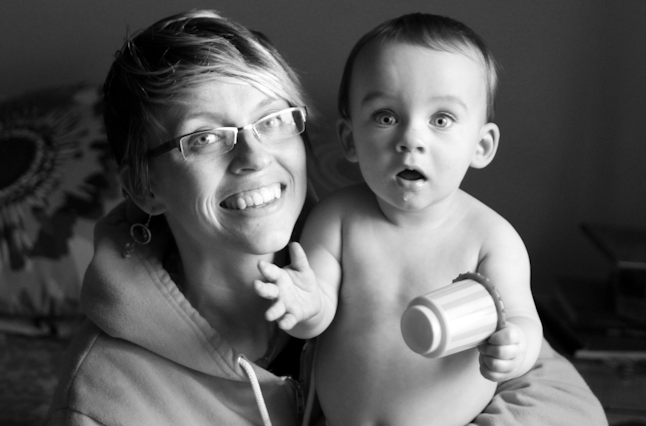 Here's a little video of our boy in the bath. Isn't great that his bath time is so well documented?
Posted by Chris 4 comments:
Labels: me and the boy, months, the boys 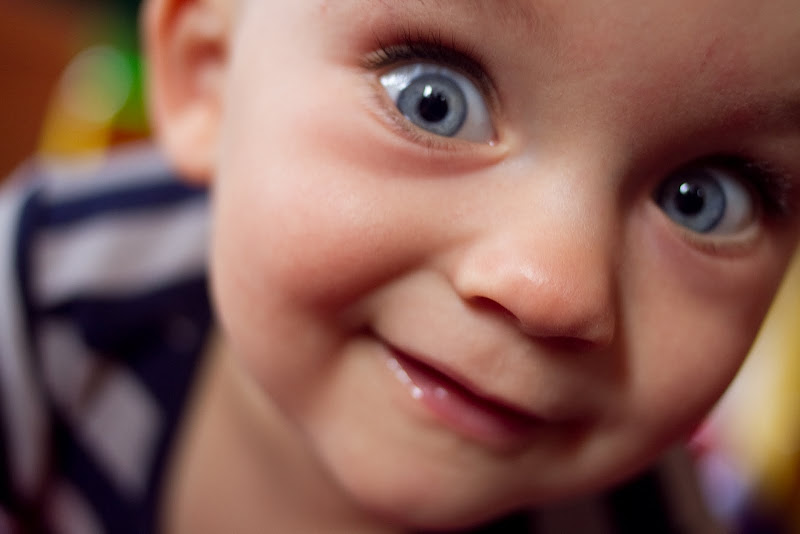 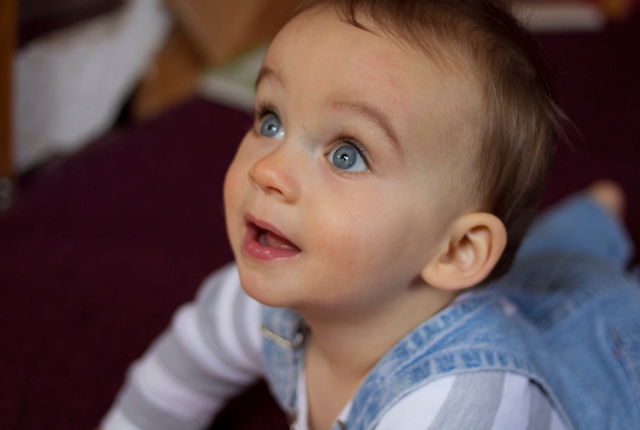 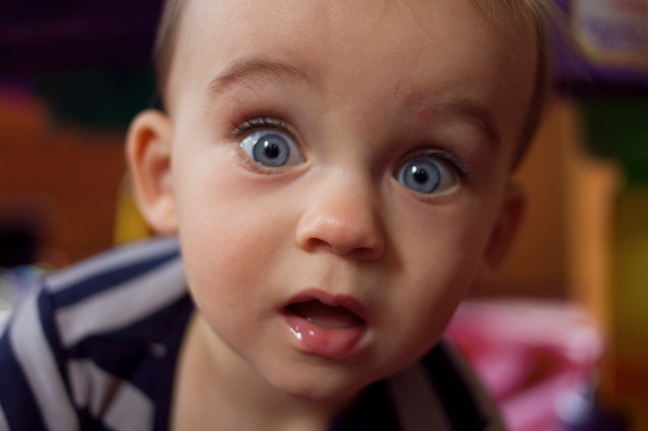 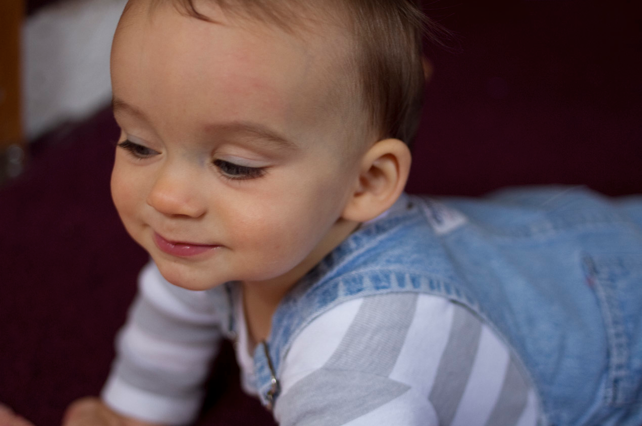 I am posting these pictures particularly for mom and liz because he also wouldn't be here without the both of you and I am grateful for you both. Today as I was running around hanging laundry and making dinner (yep, I have started cooking for realsies) I felt grateful that I get to be his mother and do those things. I will also say that I didn't totally understand the love my mom had for me until I had eyeballs. It was quite humbling, in fact. I just didn't get it before. When I look at these pictures, I find myself really excited to hang out with him when he wakes up. He makes me more content in my life and happy on my first mother's day.
Posted by Chris 1 comment:
Labels: mother's day

always checking out the world 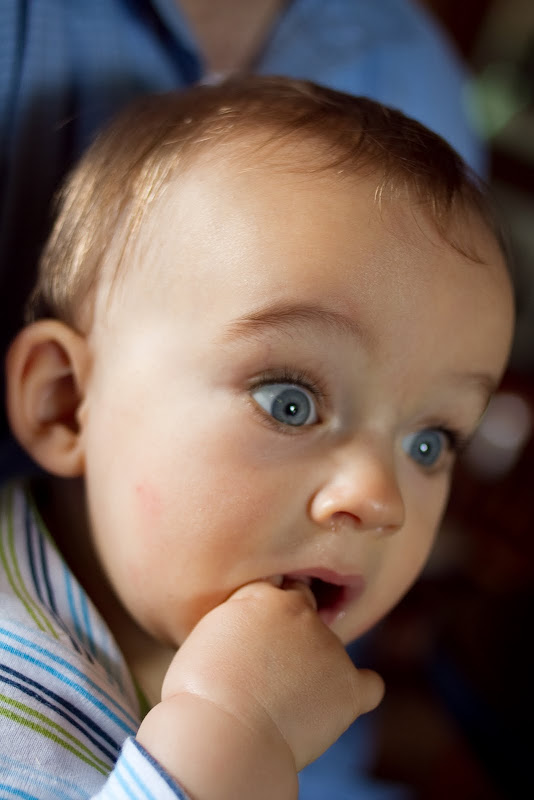 Always checking out the world, eyes. We were down at the Windsor Station Pub the night chef prepared all the new menu items. Oh yum. I took a few shots.
Posted by Chris No comments:
Labels: eyeballs, first year 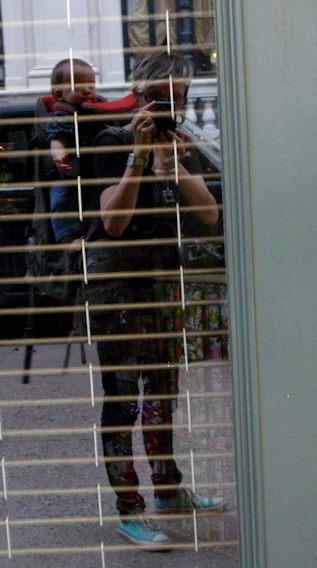 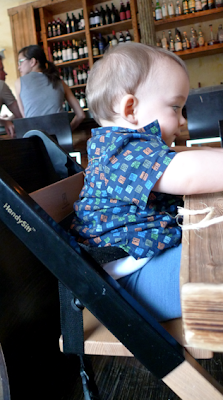 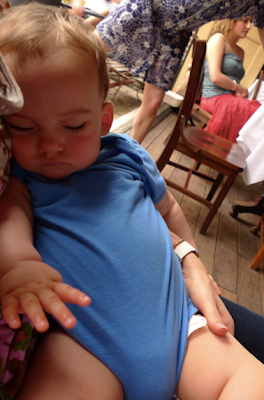 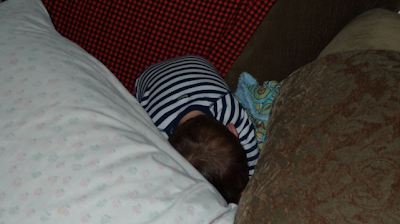 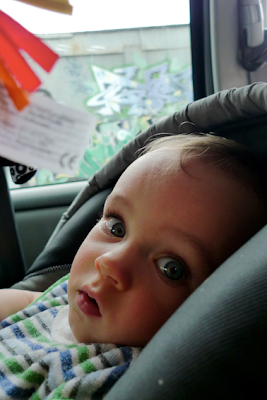 eyeballs and I got a ride down to NYC this past weekend for the baby shower of one of my high school friends. He travels so well in the car or wherever. We walked all over the show and he was content perched up in his back pack (soooo many people asked me where we got the macpac pack) which I am very glad we got while we were in New Zealand.

First stop, a new york slice of pizza and that night we went to a cool wine bar with lovely rustic food. There were so many kids in Brooklyn and it was the very early hour of 7PM. I had a pancetta and tomato panini with lemon aioli. The city was in full summer mode (it was in the high 80s) and it was perfect. I was also able to connect with one of my college friends I met in London and we meandered around the streets of Brooklyn and stopped at a French bakery for a croissant and juice. I found myself drooling over the beautiful fruits at the groceries and how much cheaper things were.

We stayed the night our friends' tiny square foot apartment and we shared a bigger than average couch for bed. He isn't into sharing space anymore. I slept on the opposite end to him and I wake up to him pulling on my nose, having climbed up from his end to mine. He was wired and didn't get settled in until 10PM so we were a little sleepy the next day to say the least.

There are also happened to be a 5 boro bridge bike race Sunday morning so everything was on a hold as thousands of bikes raced ALL over the city. It made the travel to the baby shower in Long Island a bit more complicated but we made it. Brie's friends put on a great spread of food at the shower including the most amazing goat cheese, fig, and rosemary bruschetta. Can you tell I was into the eating part of the weekend? Our boy hasn't quite experienced that heat so he was a little sweat ball during the shower but still managed to win everyone's attention.

Mike and I most definitely need to go down there more often.
Posted by Chris 1 comment:
Labels: me and the boy, new york city, travel. first year
Newer Posts Older Posts Home
Subscribe to: Posts (Atom)